RSS
← Down from the Mountain
Encounters on the Way: Bartimaeus and the Rich Young Ruler →

Encounters on the Way: Nicodemus 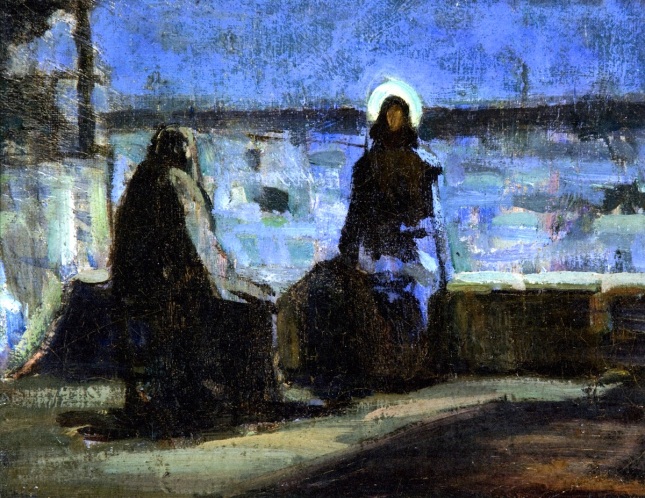 The first thing you need to know about Nicodemus is that religiously speaking, he was “kind of a big deal.”

He was, as John’s gospel makes clear from the outset, a Pharisee; but not just any Pharisee: Nicodemus was likely one of 70 members of the Sanhedrin, which made him part of the ruling council of the temple in Jerusalem and a member of what was essentially the supreme court of the Jewish faith.  So not only was Nicodemus a member of a religious class wholly dedicated to strict adherence to the law and rigid interpretation of Jewish tradition, he’d also risen to a place of great power within that body and was a well-known and well-respected teacher of the Law.  Basically, to quote Frederick Buechner’s description of him, Nicodemus was “a VIP with a big theological reputation to uphold.” There would have been no reason for Nicodemus to be the least bit concerned about this itinerant preacher who’d been around the city and attracting so much attention from all the people.

But Nicodemus had heard a whole lot about Jesus… and it bothered him; but not in the way you’d expect.

Actually, I love the comparison made by Bob Deffinbaugh in a commentary regarding our text for this morning.  Suppose, he writes, “you are a renowned pianist, trained by the finest concert pianist the world has ever known.  When you perform, crowds gather to listen.  Everyone hails you as the master [musician].”   But then along comes this young man from out in the sticks “who never had a piano lesson in his life, but simply taught himself to play on a broken-down instrument in his grandmother’s house.”  And yet, when this alleged musician comes to town, people throng to hear him perform, and “when he does, tears come to the eyes of those in his audience.”  But finally, when you get to hear him play, you understand why: “You, better than anyone else, recognize in him a musical genius that you never had and that you never will.  When you hear him play,” writes Deffinbaugh, you know deep down you will never hold a candle to him.

And so it was for Nicodemus when it came to everything he was hearing about Jesus.  Now, as John tells this story in his gospel it’s still early on in Jesus’ ministry, but Nicodemus was already well are of who Jesus was, about his teachings and of his growing reputation; and it was troubling and intriguing all at he same time.  “When [Nicodemus] hears Jesus teach,” Deffinbaugh goes on to say, “he hears answers to questions that have bothered him for years.  He watches the crowds as they listen to Jesus… [and] how he speaks in simple terms but his message has great power.”  Not only that, but everywhere Jesus goes there are signs and wonders happening, far beyond anything the Pharisees could ever claim; and oh, by the way, this Jesus had already proven to be fairly well outspoken against the religious status quo of the time, and the people were listening to him!  None of this was sitting well with the Pharisees, much less the Sanhedrin; even they knew they had a lot to lose if this so-called “Jesus Movement” took hold.  And perhaps this concerned Nicodemus as well… but here’s the thing:

Of course, given Nicodemus’ great standing and reputation in Jerusalem – to say nothing of what the rest of the Sanhedrin and his fellow Pharisees would most certainly have to say about it – all this happened under the cover of darkness; better, he reasoned, to be safe than sorry. And did you notice also that the first words that Nicodemus says to Jesus are, shall we say, a bit political in the way that he compliments Jesus: “Rabbi,” which in and of itself served to acknowledge the legitimacy of Jesus’ teachings, and then, “we know you are a teacher who has come from God; for no one can do these signs that you can do apart from the presence of God.”  But Jesus ignores this completely and dives right in to the matters at hand, one profound teaching after another:  “Very truly, I tell you, no one can see the kingdom of God without being born from above… no one can enter the kingdom of God without being born of water and Spirit… you must be born from above.”

Now, I have to imagine that Nicodemus came to this late-night conversation well-prepared with a long list of questions to ask Jesus; but what happened is that Jesus immediately took the conversation in a direction and to a level that Nicodemus was totally unprepared for!  Here’s Old Nicodemus, this learned scholar who had spent his whole life being absolutely certain of everything he ever knew to be true, is suddenly left to be stammering, “But how is this even possible?  What do you mean, being born a second time… no one returns to the mother’s womb!  What about the law and the prophets and everything I’ve built with my life over the years?  How can any of this be?”  But Jesus just keeps on going:  “What is born of the flesh is flesh, and what is born of the Spirit is spirit… [after all] the wind blows where it chooses, and you hear the sound of it, but you do not know where it comes from or where it goes.  So it is with everyone who is born of the Spirit.”

With just a few new teachings from Jesus, you see, all of Nicodemus’ cherished certainties had begun to unravel; where once there was clarity, now there were a whole new series of teachings that were, to say the least, overwhelming.  And this was not just something applicable to Nicodemus alone:  it’s worth nothing here that as it’s translated from the Greek, Jesus uses the word you – as in, “you must be born from above” – in the plural, meaning that these very radical teachings of Jesus apply to all of the pious Pharisees, all of the powerful Sanhedrin and in fact the entirety of those who would be numbered amongst those who would follow God!  Jesus was setting forth a new standard of faith and righteousness that went far beyond the idea of rigid adherence to the Law and were, at the moment, simply too much for Nicodemus to comprehend, much less embrace as truth.

But even as Nicodemus’ mind and heart were reeling, somewhere in Jesus’ words there was for him, well, a rebirth.  When exactly it happened is uncertain; but actually I’d suspect that it began at the point when Jesus, having already talked about Moses “lift[ing] up the serpent in the wilderness” as a sign of life, utters those powerful and all-essential words, “For God so loved the world that he gave his only Son, so that everyone who believes in him may not perish but may have eternal life,” which most certainly must have raised the eyebrows of the older Rabbi, but even more so when Jesus added this (this translation courtesy of The Message): after all, “God didn’t go to all the trouble of sending his Son merely to point an accusing finger, telling the world how bad it was.  He came to help, to put the world right again.”

Like I say, when it all came into focus for Nicodemus is uncertain; all we know is afterward Nicodemus would never be the same after that.  There are actually two other references to Nicodemus found in John’s gospel: the first comes in the seventh chapter (vss. 50-51), in which Nicodemus defends Jesus, albeit in a way that’s very safe, quiet and consistent with the Law, by suggesting that the law “does not judge people without giving them a hearing to find out what they are doing.”  But then there was also that moment, after the crucifixion, when Nicodemus, carrying burial spices and oils, went with Joseph of Arimathea to bring Jesus’ lifeless body to the tomb… and this time did so in broad daylight.  For Nicodemus, it was a journey that was begun in the darkness but eventually came into the light; and it was a journey that was propelled by his own seeking and his willingness, however reluctantly at first, to encounter Jesus on the way and to ask the difficult questions of what it truly means to walk and to live in faith.

And here’s the thing, friends: as you and I make our own journeys of faith – both during these 40 days of Lent that lead us to the cross and beyond, but also on the way of life itself – it would seem to me that Nicodemus would be a good inspiration for each one of us as we set forth.  Because what Nicodemus reminds us is that being “born again” is not so much a “re-do of our first birth.” It is, to quote the Rev. Dr. Cynthia Weems, a Methodist pastor and preacher out of Florida, “a different kind of birth – one that allows our spirits to overcome whatever blows the physical world has dealt us and live freely, fully remade, with knowledge and experience of the living God.”

But how can that happen, friends, unless we don’t first ask the questions we need to ask so we can find out the answers?

Some years ago, in a prior church, I had a young parishioner who actually said to his pastor, “I don’t think I need to go to church anymore… I really think I know all I need to know about religion.”  And he wasn’t kidding!  Call it youthful bravado, an overwhelming sense of inner certainty, or simply the great desire to spend his Sunday mornings somewhere else (!), but the bottom line is that at least in his own mind this young man had no further questions to ask of God; and nothing I would say to him could ever convince him otherwise!  Now, I trust that as he grew in age and maturity, and as life unfolded in its always mysterious and surprising fashion, he discovered that yes, in fact, there were questions and subjects that he and God had yet to discuss… but if not, I feel sorry for him.  Because truly, friends, faith is not a destination, but an ongoing journey with twists and turns and unforeseen happenings that can only be confronted in the presence of God in Jesus Christ and by the leading of God’s Holy Spirit.  Each one of us, you and me, are people meant to be born of the Spirit and set forth on a way that is walked upon the earth but governed by heavenly things.  We must never be afraid to let that Spirit take us where it will, and as it does, to ask the important questions of being and of true faith.

Sometimes the answers received will bring us comfort and much needed hope, and yes, sometimes we’ll find ourselves feeling nearly as confused as we are challenged by the truth of what the Lord has to say to us.  But what we’ll always find is that in ways we can never predict or wholly understand life – now and eternally – will come into focus, and we will never be the same again.

A good way to begin this Lenten season, I think, and a good reason to come to the table of blessing this morning.

Thanks be to God.

← Down from the Mountain
Encounters on the Way: Bartimaeus and the Rich Young Ruler →